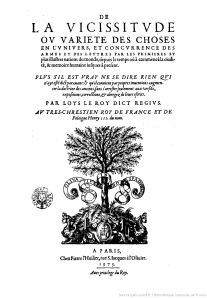 The title page of Loys Le Roy’s 1575 treatise. Note that it is written in the vernacular, rather than in Latin.

You may have noted that the tagline in the header of this blog promises commentary on Renaissance literature, among other things; but if you’ve browsed the archives, you’ve likely noticed that the Renaissance has made only scant appearances here. There are a number of reasons for that: following my dissertation defense last year, I took advantage of the breathing room to write about other ideas and interests that I had pushed aside in order to focus on the dissertation. All of my Renaissance-oriented research and work has been taking place “off of the grid,” as it were. Part of the reason for that decision lies with the culture of traditional academic publishing, which tends to value submitted materials that have not been disseminated via other outlets. As more and more academic research begins moving towards open-sourced journals and outlets, I see academic blogging becoming more of a crowd-sourced revision process, wherein a writer can workshop an idea with colleagues before polishing it to publish elsewhere. Some journals encourage this already; the Journal of Digital Humanities, which you can find here, is an example of a great open-sourced journal that functions more as a bricolagé of academic research and ideas, rather than a traditional publication outlet. I also recommend taking a look at Hybrid Pedagogy, an excellent online journal dedicated to brief scholarly perspectives on digital pedagogy and pedagogical practices.


But there I go again, on one of my characteristic and beloved digressions! With that, let me turn directly to the Renaissance, via a new series that I am introducing in this post, “Reading the Renaissance.” My goal with this series is to highlight one or two short pieces of (primarily) prose writing by both English and Continental writers from about 1400 – 1600, providing a brief summary and analysis of the given piece(s) as a means of conducting a conversation about Renaissance thought. I have always been interested in Reformation era humanism, particularly as it was taken up and later adapted via Henrician Reform in England. Through this series, I want to take a little time to parse out ideas by writers and interlocutors. And why not? Such a thrilling time in world history, a veritable “golden age” of learning and thought – what’s not to love about the Renaissance? This is also a great opportunity, in my view, to stand back from the sort of scholarly analysis that English literary studies demands, and take up a more broadly historicist view, as a means of enriching my own understanding and appreciation for the Renaissance era.

I’m going to kick off this series by taking a look at a piece which neatly ties together my opening comments on academic research and publishing with commentary on the “golden age” of Renaissance thought, “The Excellence of This Age,” Loys Le Roy, 1575 (French humanist, early comparative cultural historian).

For a student and aficionado of Renaissance thought such as myself, Le Roy offers an excellent summation of the most wondrous aspects of the era; he openly enthuses that the efforts of hordes of philosophers, writers, and scholars have “led to such success that today this our age can be compared to the most learned times that ever were.” Importantly, Le Roy argues that printing is the most important advancement of the era, “because of its excellence, utility, and the subtlety of craftsmanship [which allows more work to be] accomplished in one day than many diligent scribes could do in a year… The invention has greatly aided the advancement of all disciplines.” The second most influential invention of the age is the marine compass, which he credits with the successful navigation of heretofore (unknown) parts of the globe, while the third item on his list is cannonry.

Regarding philosophy, Le Roy laments that scholars of his era “spend their lives sheltered by the academic shade without acquiring any practical affairs, although learning is imperfect without application,” a condemnation that Descartes would later parallel in his Discourse (1637), in which he complained that the Aristotelian scholars of his day were “like the ivy that tends not to climb higher than the trees that support it, and often turns back again after it has reached the top of the tree.” This style of philosophizing, Descartes opines, is “appropriate for those who have only mediocre minds; for the obscurity of the distinctions and of the principles that they use is the reason why they can talk about everything as confidently as if they knew about it, and defend everything they say against the must subtle and knowledgeable, without leaving any room to convince them of their mistake.” Le Roy does not go quite as far; in fact, in a move that Descartes would likely have been skeptical of, he praises the advancement of mathematics in the sixteenth century, although this is largely due to the work of astrologers and cosmographers such as Copernicus.

But then, in a step that is simultaneously quaint and troubling, Le Roy also confesses his fears that the great advances of the age “may in the future decline as they have done in the past and be destroyed; that the order and perfection of today will be succeeded by confusion, refinement by crudity, learning by ignorance, elegance by barbarism.” Here he reveals a xenophobic streak, as he agonizes over the number of “certain peoples, strange in form, colour, and habits, pouring in upon Europe, [who will] change our customs, laws, languages, and religion.” At this moment, Le Roy sounds like a modern-day conservative politician writing an anti-immigration screed for the local newspaper, warning all citizens that these newcomers will “burn our libraries, ruining everything noble they find in the countries they occupy in order to destroy their honour and virtue.” To be fair, actual combat was taking place in pockets throughout Europe at the time, as factions throughout Europe fought skirmishes in the lowlands during the waning decades of the 1500s. These conflicts eventually spilled over into the 30 Years War and the English Civil War.

Yet, distinctly unlike the Tea Partiers and neocons of our own era, Le Roy ends on a distinctly hopeful note, one that embraces a universally optimistic view of the future: “men of good will should not be astounded but should rather take courage, each working faithfully in the vocation to which he is called… to transmit them to those who come after us just as we have received them from their ancestors.” The tone of his conclusion is decidedly Christian, as Le Roy urges his readers to take comfort in the guidance of divine providence, and to always seek to glorify God in their own work.

What is most compelling about Le Roy’s epistle for casual historians and lay scholars alike is the great catalog of intellectual and technological achievements that make up the bulk of the content, and which I have just touched upon above. It’s a way to remind ourselves, in the midst of our own technology-crazed world (Google is making VR glasses, iPods have been around for a good decade, cars have navigation systems that almost make a mockery of the lives of Drake and Pizarro), that fundamental shifts in the way humans communicate and interact have long been met with a mixture of eagerness and dread. Le Roy clearly embraces the wondrous advances of the age, and implicitly acknowledges that his own erudition owes an incalculable debt to the printing press. From my own perspective, some 437 years later, digital archives and online databases have had much the same effect.

Fear not, pessimists – there were PLENTY of Renaissance thinkers who were convinced that all was not well, and that technological advances were not an aggregate force for good in the world; John Donne, for example, was mistrustful of printing presses, circulating all of his poetry in manuscript form whenever possible. We’ll get to hear more from that side of the coin in the weeks ahead!

This site uses Akismet to reduce spam. Learn how your comment data is processed.